My project for the Apartment Therapy January Cure was to make this little unused corner into something more, well useful.

It was really just a catch all for random stuff that I would carry upstairs to the bedroom. It was also a favorite place of the cats to sit at the window. 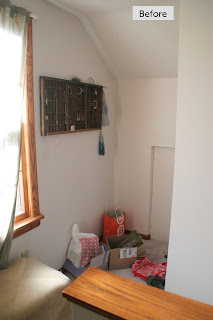 I didn't paint anything as it always takes me forever to pick out colors. That and I'm trying to talk HT into just getting rid of the carpet upstairs.

I moved my old laptop desk up and took out the "hidden" desk part to use as another surface  It was pretty easy to use the tables stop bracket as an anchor for the wall. 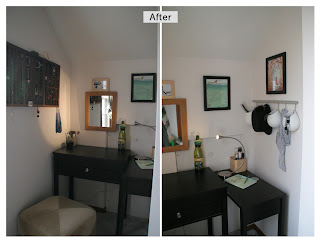 I had some Ikea hanging bits that were origionaly for the guest room, but I love the storage they give me here.
I now have a nice little spot to get ready in the morning. Accessories, make-up, hair bits all in one place. And when I'm not using it, the seat goes back by the window for the kitties.

We mustn't make them grumpy. 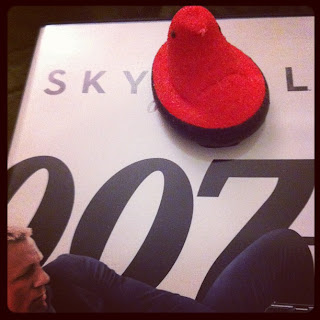 We had a quiet V-day. HT and I don't normally do much to celebrate that day.
But I did find him some strawberry peeps with dark chocolate butts. We kept meaning to get out and see Skyfall in the theaters, but it just never happened. We almost didn't get to watch it that night too. HT's original X-Box 360 (a red ring of death era Xbox that never had to be replaced) no longer likes to open its tray. Sherlock Holmes and the Game of Shadows is stuck in there and didn't want to give up its place for Bond I guess.

I've also started playing my first RPG with dice in a long, long time. It is Star Wars Edge of the Empire. I'm playing along with the Geek Dad's Pod Cast guys. They are letting me play long distance with them. I'm a Twi'Lek thief escape artist/hacker/chick with 2 knifes. So far it has been fun.

Enjoy the rest of your Feb and I'll maybe post something up in March.
Posted by ikisti at 11:12 AM No comments: